The Eye of the Tarpon 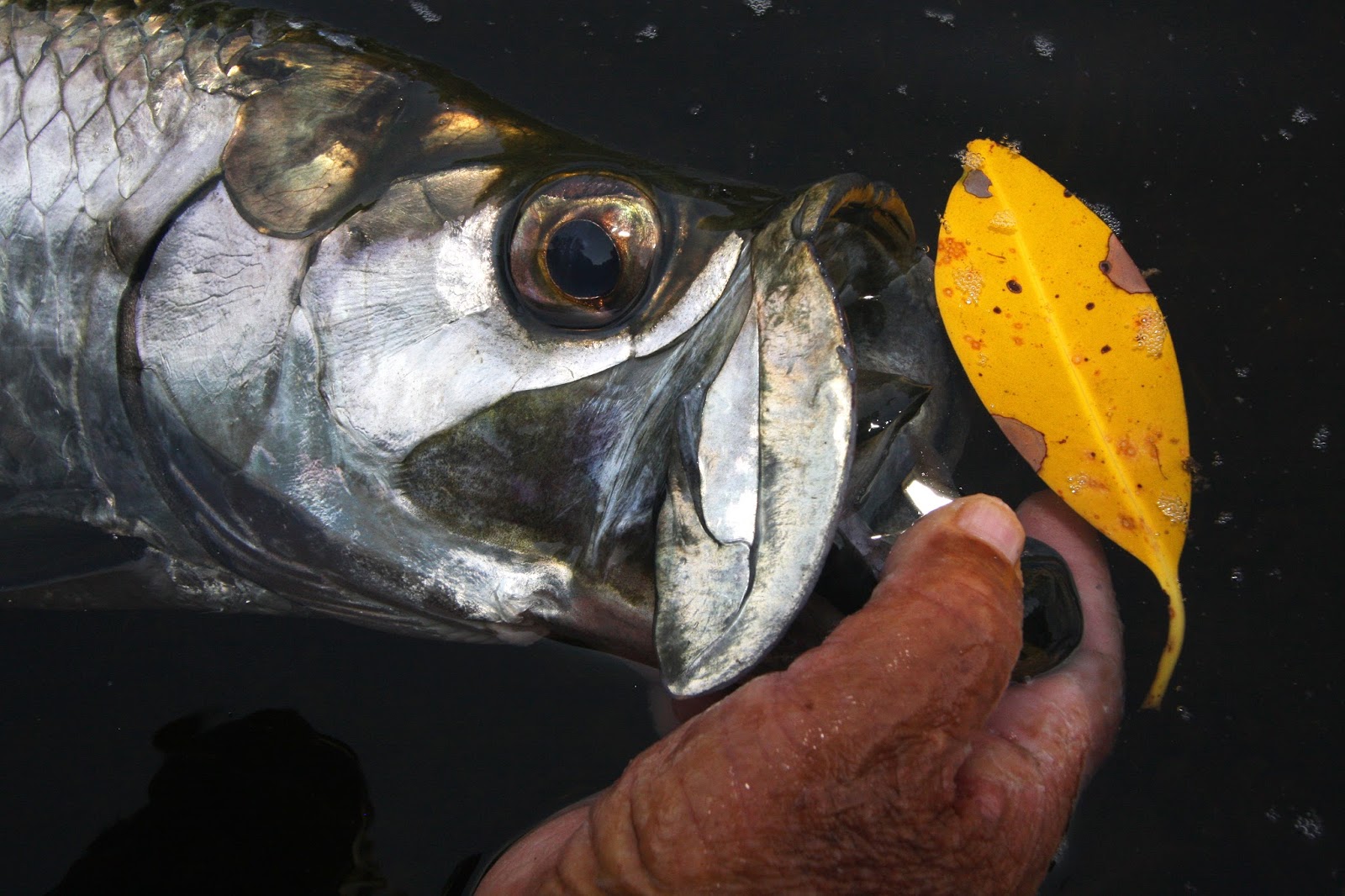 Tarpon are one of the world's greatest gamefish, some say THE greatest. I won't argue the point, but let's just say these powerful creatures stir the passions of those lucky enough to get the chance to pursue them! 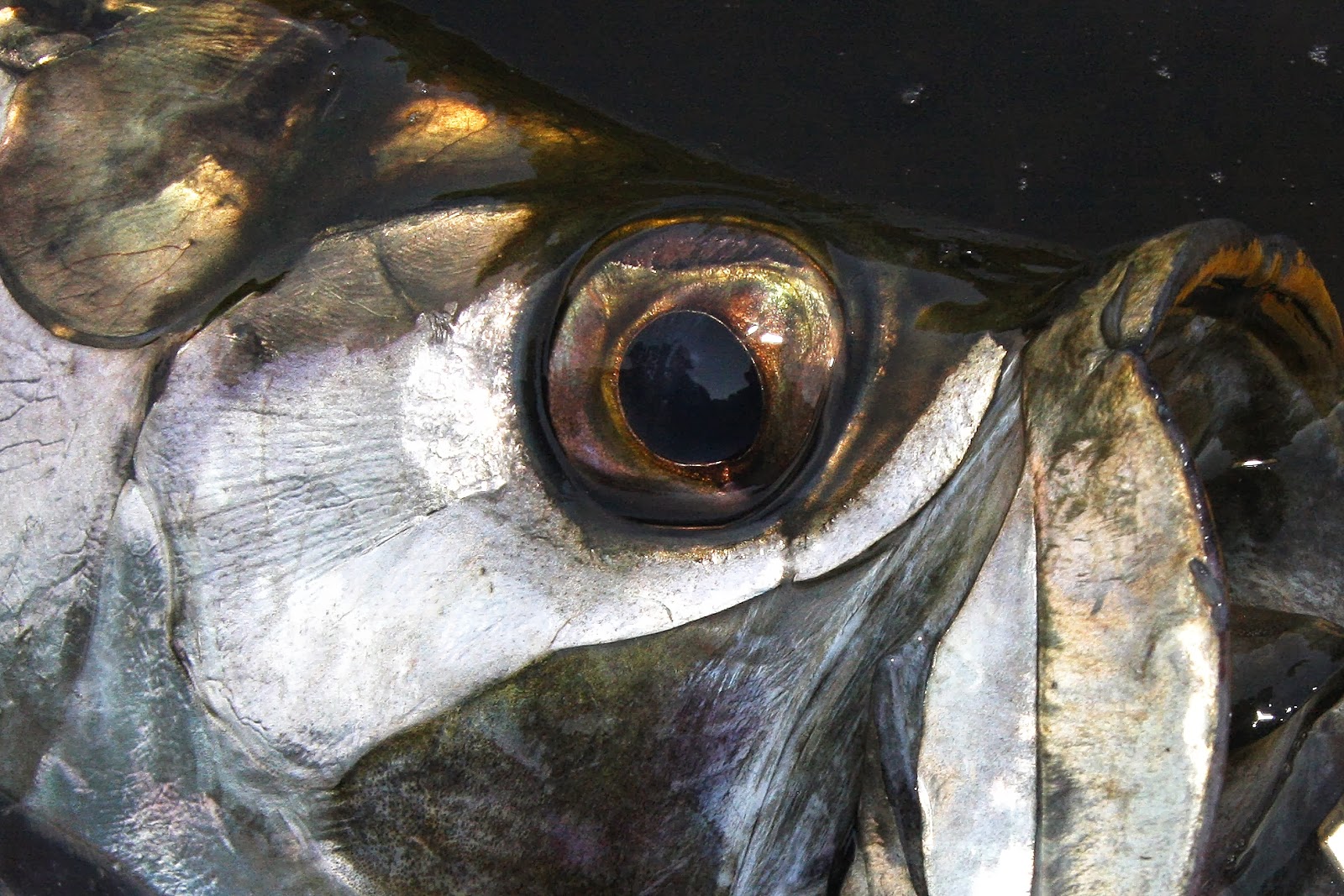 The latin name for tarpon Megalops atlanticus translates to big eye in English so when I was copied on this very interesting interchange between two good friends of mine, Doug Jeffries and Danny Sheldon, I thought FLY PAPER readers would enjoy it. Both guys are very experienced both in fresh and saltwater, both are well traveled and both are very skilled fly tiers and fly fishermen. So obviously, when they have something to say, I listen!

Doug started by sending this e-mail out to a bunch of friends:


Just reading the latest newsletter from the Tarpon Recapture Genetic Project In this issue, there is an article about tarpon eyes and I thought the paragraph below was noteworthy:

"Atlantic tarpon have five types of cones structures in their eyes. That is correct. There is
no telling what the underwater or above surface world looks like to a tarpon. Their cone cells can detect wavelengths into the ultraviolet light spectrum, and some measurements in adult tarpon revealed they could see wavelengths as low as 364 nanometers. This cutting edge research is being done by students at the Florida Institute of Technology and is showing the world that tarpon have some of the most diverse visual cone systems of all known animals."
The article says humans have three types of cone structures and some birds and insects have four types of cones. Tarpon have five!
I'm thinking maybe those UV spectrum fibers might actually be useful in tarpon flies.
Doug

From my experience I'm convinced tarpon have uncanny eyesight. Not only below, but above the water. Don't know how many times we've had a poon what we call bloop (or roll) and stick it's head out of the water to get a good look at us. They feel the boat, here the push pole or worse trolling motor. Always seems like that big eye is looking you right in the eye. Of course you can usually forget that fish.

Due to the age of the fish and the constant pressure they receive in the Keys during the annual migration, my guide friends are constantly trying to tweak there flies to give them a different look. The fly has to typically be above the fish as most everything they eat is above them in the water column. In addition, the fly has to look natural. Easier said than done. You can forget the strip, strip, strip you see or hear on videos, etc. at least in the Keys or on pressured fish. Guys that know how to feed fish will always try to be in a spot that has current. You can use the current and wind to swim the fly so that it "just appears" in the fish's face. A very respected guide in Marathon often has his guys make the cast, get tight and he moves the boat to manipulate and position the fly. He's usually fishing larger groups of fish with this technique, but the point is he's figured out what looks most natural and he can do it with the boat better than most of his anglers can.

With all that said it would not surprise me if the UV fibers would be useful. Seems like smaller flies that appear to swim and suspend without much movement (by the angler) get more looks. I like rabbit and fox. S.S. Flies Fox Fur tarpon fly or variation is a good example (and really good fly!). Just my two cents for what that's worth.

Doug then added this:

That's some seriously good boat handling if he can position and move a fly into the feeding lane of a bunch of tarpon using the flats skiff without spooking them.

We need a fly that looks like natural prey (baitfish, shrimp, crabs, worms) that moves exceptionally well and is neutral in the water.  So what we need is some material that is ultra soft, moves at the slightest twitch or current, and floats.  Since we need a metal hook in there somewhere, the material would have to be lighter than water.  Any one know of any fiber material that fits those characteristics?  Maybe we could tie a small strip of closed cell foam along the hook shank and then tie the rest of the fly?  Or maybe a strip of Larva Lace tubing, filled with air or oil, sealed on both ends, and then tie the rest of the fly?  I've seen some videos recently of plastic lips and cones tied in at the eye of the hook or slipped over the leader and they can really make a fly dart and wiggle.
Doug

So let's see what Doug comes up with and if there are any other observations from these guys. Stay tuned and if you would like to wade in with suggestions for flies, hints or observations... PLEASE DO!