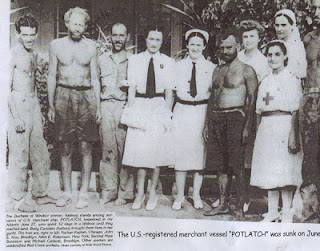 If you read the story involving the Bahamas in WW II, you know we were seeking more info on the the 47 survivors of a sub attack that sank their boat the Potlach. Those that survived the U-boat attack spent a month in lifeboat. They had a man die from a shark bite and incredibly made their way in the lifeboat from near Ragged Island past Inagua to eventually arrive at Acklins Island. From here, they got a ride on a yacht owned by an heiress to Nassau and eventually reached New York City.

If you haven't read this post, I urge you to do so. Author Eric Wiberg is writing a book on German submarines in the Bahamas during WWII which includes this event. He is trying to find out more info on what happened to the survivors on their journey from Ragged to Acklins Island. This is where I got involved in this intriguing detective story.

It all started after I sent Eric some requested info on Ragged Island and he replied:

Dear Scott,
Thanks very much for your prompt and very helpful reply - the contact you shared is the only direct line I have with Ragged Island (2 ships, Michael Jebsen and Empire Corporal, were sunk just south of Ragged Island in 1943 by a sub under Holtorf - U-598. I believe - as part of Convoy TAW 12J).

The POTLATCH survivors landed in the NE corner of Great Inagua, sailed their lifeboat to Little Inagua, then past Hogsty Reef, and made it to a point SW of Acklins Island off Castle Island. Then they waited till sunlight, sailed to a small community which was presumably Salinas, and from there were met with Constable Bain who took them in the GO ON to the Anderson settlement and they walked to Hard Hill. From there the skipper John "Jack" Lapoint walked to buy food supplies and contact Nassau. The 47 men stayed in a school and were looked after by local women. Second Steward David Parson (I attach his bio as well his death certificate in which the skipper lists his relationship as that of "friend"), died in the arms of the skipper within sight of rescue on their final day in the metal lifeboat.

Parson is buried, presumably in the Anderson or Hard Hill cemetery - any chance I could find someone locally through you that would be willing to look for the grave marker?

The Rev. Capt. Collie (not sure first name) officiated the burial. I have been in contact with Mr/Rev Hervis Bain of Acklins but it is very intermittent. I would really appreciate your help as a photo of the grave, which is one of only two providing evidence of all this history, would be huge.

All my best and I recommend you go to www.uboatsbahamas.com and follow the drop-down tabs for ATTACK NARRATIVES and SURVIVOR STATEMENTS for the POTLATCH or any other ships and you will find a lot of detail including original documentation.
Thanks again
Eric

Then last weekend, I got this e-mail from Eric. He had some good news:

Dear Scott,
Some generous soul through a B&B owner on Crooked Island [Mari Anderson-Ed.] physically went - at their own expense - for a day in a car to the site of the POTLATCH landing, and you won't believe what they found.... eye witnesses, photos, the graves, the church, the school - everything but the schooner GO ON which I understand was a gaff-rigged sloop and has long since "gone on"...
Best,
Eric

I asked Eric for more details. He sent me the e-mail from Mari Anderson who is one of the "generous souls" who went to the site of the Potlach landing to get more info. Here is her e-mail to Eric:

Hi Eric-
We had quite a day.  We have lots of photos and some audio recordings that I’ll put in your dropbox sometime tomorrow, but for now, let me hit the high points.

David Parson is indeed buried at Hard Hill/Anderson’s Cemetery, as corroborated by two people who were in Hard Hill when the sailors were there, but after many decades and many hurricanes, no marker remains, if there ever was one. 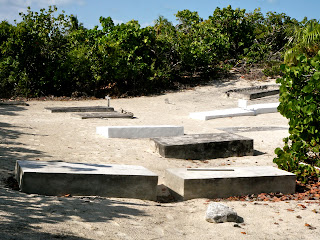 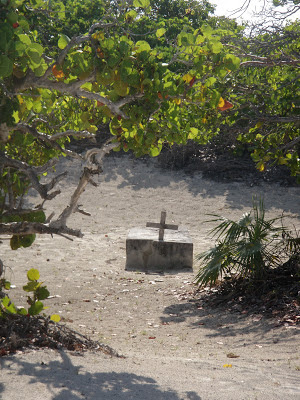 There are, however, several old cement slabs with no identification.  It’s possible one is his; also possible sand and time have covered over the exact spot.

It’s a very beautiful place.  Almost all the identified graves belong to members of the Collie family, which brings me to:

Reverend Clemese Alberta Collie Cox, 86, a lifelong resident of Hard Hill and the daughter of Capt. Rev. Samuel Collie, co-owner with his brother Alfred (I’m sure you already know this) of the ketch Go On. BTY, everyone who remembered the Go On spoke of her as a two-masted boat, so, Fritz tells me she was a ketch, not a sloop? - more on that later.

Capt. Collie lived to be 95 and was pastor of the St. Mark’s Baptist Church in Hard Hill for over 50 years. When he retired, his daughter Clemese took over, a role she continues to this day.

Clemese Cox remembers the men, the fact the one died and was buried in the HH Cemetery and that they housed and fed them at the school.  She said they had a service for him at the Baptist Church prior to his burial. Doug recorded our conversation with her on his iPhone, so you can hear for yourself.  She is a sharp and delightful woman.  We took several photos of her, too.

The school is still standing.  We took photos it inside and out. 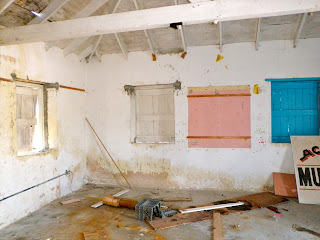 We were then referred to a man named Newton Williamson, 78, of Pine Field. Mr. Williamson was 7 years old when the survivors arrived.  His account is different from the sequence of events on the U Boat page, but here goes:

Mr. W was at home on the hill overlooking the beach in Pine Field when he and his brother and sister saw the boat sail onto the beach. He took us to the spot (got photos) and also showed us the ruins of his childhood home. He reported that the men immediately asked for food.  The youngest boy was dispatched to HH to fetch help.  Capt. Collie returned to PF with the Go On and towed the men and metal boat to HH, where they walked or were carried into the settlement - a distance of a couple of miles.

I did ask him specifically if the Go On had been towing the metal boat when it landed.  He said no.  Best for you to hear this for yourself on the recording, I think.  Interesting, though, huh?

As for the Go On, the folks we talked to who remembered it all believed it was sold at some later date and went to another island.

No leads on Constable Bain or the metal lifeboat.  Lots of head-scratching on that one.

YES, TO ALL OF YOU THAT HAVE FISHED ACKLINS ISLAND, THE MAN WHO FIRST MET THE SURVIVORS WAS NEWTON WILLIAMSON! YES, THE NEWTON WILLIAMSON, OWNER OF GREY'S POINT BONEFISH INN AND A MAN I HAVE KNOWN FOR 20 YEARS. I HAVE NEVER HEARD THIS STORY BEFORE!!

I thought this was so incredible, I'm including the entire interview with Rev. Williamson in the next post. This interview gives an wonderful insight into the Bahamas during World War II. Newton was only 7 or 8 years at the time. I'll post the interview in the next few days.