I could tell you that a day like this is common in the Bahamas. But it would not be true. A day like this is a rare gift. These islands own a hot sun, making wind a constant companion for the bonefisherman. Learn to live with it or quit… it’s your choice. But this morning had dawned calm and it was still dead calm. There was not the slightest exhalation coming off the big island of Andros. These are the kind of days you dream about… a few wispy clouds, a few small thunderheads way off on the horizon and a sea as slick and quiet as a marble slab in a morgue. If you could only bottle these days and take a sip once a week, a desk stacked high inside a slushy sidewalk just wouldn’t seem so bad.

As I stood staring at the simmering sea, I realized there was no horizon. In its place was just the diffused blend of flat, grey sea and dull blue sky.  If you stared only at the mangroves’ reflection in the water, it looked like a world gone upside down. The reflected image was perfect with mangrove leaves, gnarled roots and scattered white clouds. The only give-away in this reflected view was the cloud’s bellied anvils were pointed down like pots. Heat had slowly oozed into the day and now drops of sweat rolled down my back.

I took a step forward advancing from a patch of soft marl and white sand to a hard rocky shelf.  Startled crabs, with claws drawn like six guns, stood their ground itching for a fight. I scanned the pale yellow flat. Dragonflies hung in the air and one landed lazily on my rod tip. Cicadas thrummed their “rake and scrape” in the background.  An osprey changed direction to push overhead, briefly canting its head down to stare at me. Was it just curiosity or a tip of the hat from one fellow angler to another?

All was perfect… the stuff of dreams. This was the second morning like this. But as still and calm as it was, anticipation hung in the air like the drive to a high school tryst.  I was all dressed up and ready to go… I just needed my date to show up. I scanned the shoreline looking for the last element to complete this perfect picture... a fish.  I knew this wasn’t the best weather for bonefishing… a small wind scuff always increased your odds. Wind hides you from the fish, while calm water allows a closer scrutiny by a shallow water predator with senses perfected over countless millennia.  But I wished for no wind.  For me, the most thrilling moment in bonefishing occurs when you see a tail scratch the surface on a calm day. On a day like this, you can see a tail glinting across a flat... seemingly a mile away.  On a day like this, the splash from a six-inch needlefish can stop your heart.

The tide was dropping now, draining water from the mangroves.  Two small creeks worked at the placid surface where sun-warmed water drained back into the bay from the island’s interior. It looked like wind scuff, but was only a gentle current. Calm prevailed, yet I felt agitated as anticipation reigned.  I needed a fish to complete this perfect picture... one fish, one shot, one tail, one hookup.  It may have seemed a shame to destroy this remarkable calm, but winter was in charge up north and a man has to do what a man has to do.

As I stood waiting, I drew my backpack strap off my shoulder and felt inside the pack for the camera that I had placed under my raincoat. I took special care to place the camera’s sling around my neck before reshouldering the pack to my back. I took a few photos, taking time to look at the digital image to see if the photo conveyed accurately the beauty of the day. It did.

Just then it happened. I saw a tail pop up and slowly ease its way around a mangrove shoot.  This fish was obviously enjoying the day as much as I was. To a neurotic fish doomed to a life of incessant scanning for sharks and barracudas, perhaps a day like today evened the odds. The water was clear and there were no lapping waves or surface scuff. With no background static, bonefish senses, tuned by eons of predation, would work as designed. Maybe for this day only, all the bonefish on Andros could just relax and act recklessly. At least as recklessly as a bonefish can act given their serious need for maintenance levels of Prozac augmented with a Valium shooter. Eventually, I lowered my camera and shifted my rod to my right hand. But for some reason I paused. What came next tempted the fish gods. Stupid I know, but maybe this calm day had made me as relaxed and reckless as my tailing companion.

I know you take ‘em when you can get ‘em. Bonefish tails are rare so reach back, make the cast, get the hookup. In front of me was a happy fish, a fish ready to eat.  Instead, I placed my rod back in my left hand and raised the camera.  I would get a picture of a tailing fish. 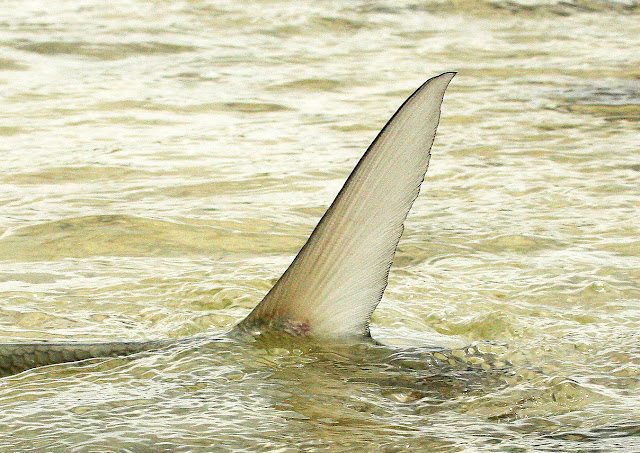 Yea, that’s the ticket. I’ll take a photo, then I’ll catch him." I told myself.
Obviously the hot sun and lack of breeze had sizzled my brain. I was tempting fate and I knew it. I would deserve nothing more than double goose eggs and I'd probably change the weather in the process.

But I took one photo, then two, searching through the viewfinder for the elusive tail. I checked after each exposure and saw nothing. Maybe these bonefish really are ghosts or maybe this fish was an apparition created by a brain heated to the point of hallucinations by too many hours on the flat. But I foolishly continued trying to photograph a tail. At one point, I spotted another fish as it tailed in from my left.  I ignored him and eventually, as he gazed up at me with that big black eye, he finned slowly away.  Geez, was I tempting fate! I was a fool festooned in khaki and basted in sunscreen just waiting to go from the stove to the frying pan. My fish continued to happily tail until he rushed ahead throwing a big boil into the surface of the glassy water. 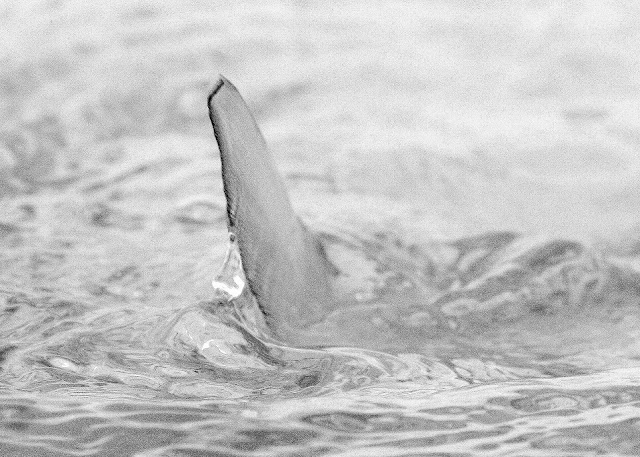 "Spooked him!" I thought. "See, you should have taken the shot."

But, just as I prepared to move on, I saw him tail once again. Then, in the reflection of a big dark mangrove bush, I could see his entire pale green form. He had a crab crossways in his mouth. Tan claws stuck out each side of his mouth. This was a big crab. You’d need major ordnance to deliver a fly this big. You’d need a 14 wt. rod and enough rug yarn to carpet a small office spun on a 4/0 hook to deliver a fly this size.

Then he crunched. I could hear the crab’s exoskeleton crack as the big bonefish reached the sweet meat inside. On this still morning, it sounded like a bunch of diners at Long John Silver's.  After a few loud cracks, it was over.  No chewing, just crunching once, twice, then I presume, swallowing. I figured that much crab meat would fill him up and he would soon adjourn to deeper waters for cigars and brandy.  But no, if you are a bonefish, you must make hay while the sun shines, so in no time he was off tailing again. He meandered towards the mouth of the first small creek.

OK, no more photos! It was time to catch this fish before he filled up on crab cakes and shrimp cocktails. I raised my rod just as his tail disappeared into the roiled waters at the creek's mouth.
"Oh man, now you’ve really done it." I lamented.

I squinted and I stared. Nothing. Eventually, I had to accept the reality that he had found the current from the creek, leaving me with only a few silly photos and perhaps a nice memory. But luck was smiling on me today and three feet beyond the riffle, a tail popped up again.  I quickly cast. My fly landed with a plop to the side and slightly behind my fish, about at his pectoral fin.

Before I could say, “they don’t eat from that end”, he pounced like a cat and pinned my fly to the bottom. I could see the pink bead at the hook eye just above his right gill. He finned backward drawing the fly towards his mouth until he took it all – the bead, the rabbit fur and the hook – in one big vacuuming rush of water.
I stripped and he was on. 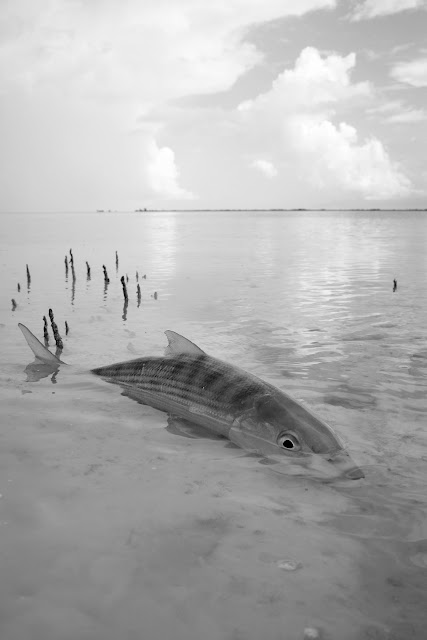 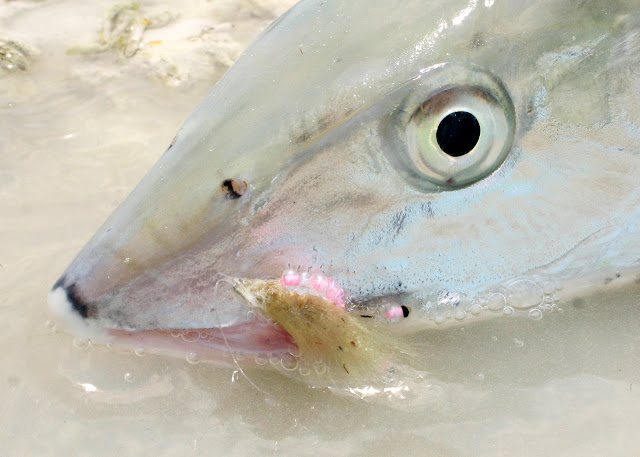 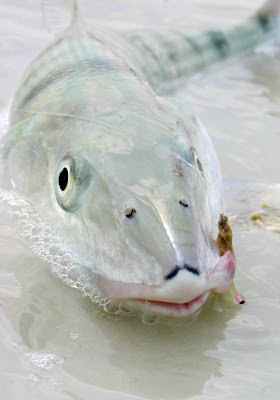 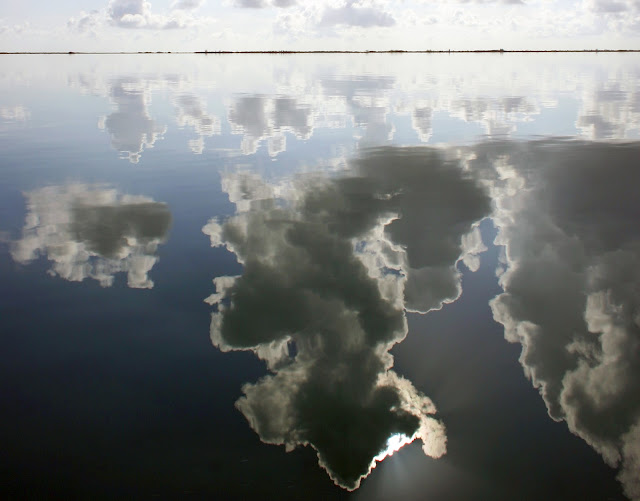