Most Memorable Fish: West Side of Andros

I was once asked in a magazine interview "What is your most memorable fish?"


I answered, "There have been many, but the fish that I would choose as my “most” memorable was a tarpon I hooked, but never caught, while kayaking on the west side of Andros. For those who are not familiar with Andros or the Bahamas, this coast has no settlements and was and still is, rarely visited by anglers. About 14 years ago, I kayaked from the settlement of Red Bays on the northwest tip of the island to the southern tip ending the voyage in Jackfish Channel. 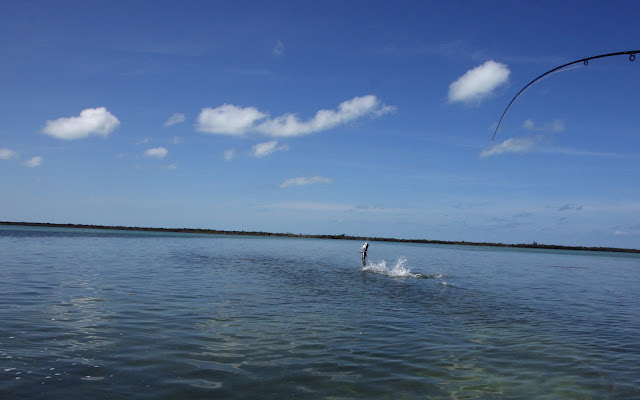 As I remember, I had scheduled two weeks to make the journey. About midway through the trip, I had paddled up a very small creek that eventually spread out into a shallow lagoon. The bonefishing was superb and the area had probably never been fished, as there was really no access to the area by skiff. There were no footprints or evidence of boats. After catching countless big bones, I found another small creek and sat at its mouth eating peanut butter off my fingertips out of a jar. It was then that the submerged log that was guarding the creek's entrance moved. I quickly sucked the last of the goo off my finger and clipped off my Crazy Charlie. I attached some ratty-ass tarpon fly to a bite tippet then tied it to the bonefish leader with a Hufnagel knot. I was using an 8-wt. rod. The fish was facing me and I had no idea of its size. I made a short cast. The tarpon barely had to move to eat the fly. I set the hook and immediately realized that what I had done was probably not very prudent. 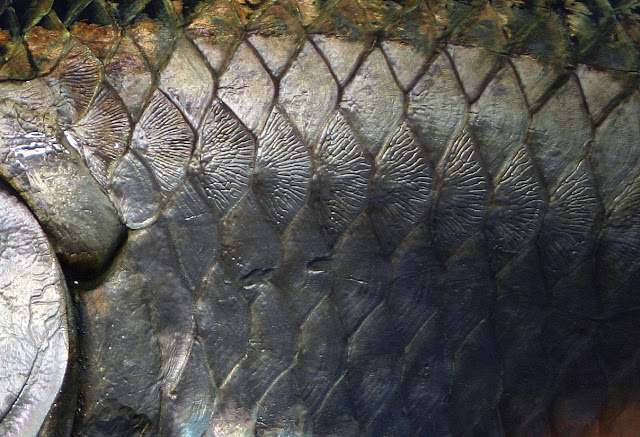 The tarpon was in less than two feet of water so the fish really didn't jump, he just took wing and came straight at me. It was then that I realized a few more things:


I realized that an 8 wt. was not the right rod for this size of fish.
I realized that I had stupidly left this big fish no room to retreat
and I realized that I was going to get hit... hard... and it was going to hurt.
Almost instantaneously, the tarpon smashed into my boat and me. Now remember, I'm in a kayak. I was sitting virtually at water level so the fish seemed to soar above me as he charged at me. When he smacked into me, he bent me over the kayak’s wooden gunnel and in the process, badly bruised my rib cage. Looking back at it, he didn’t really jump over the boat so much as go through the boat all the while spewing that particularly disgusting fecal material that tarpon seem to love to get rid of when stressed. I was suddenly in pain and coated in a disgusting, pale brown pudding. I worked hard to put the brakes on the fish, but soon learned that I had another problem. As the tarpon towed me to the deeper water of the lagoon, I noticed that my butt was getting wet. I looked down and discovered that I was sitting in six inches of water. Apparently, the tarpon had damaged the skin on my foldable kayak and I was now sinking. 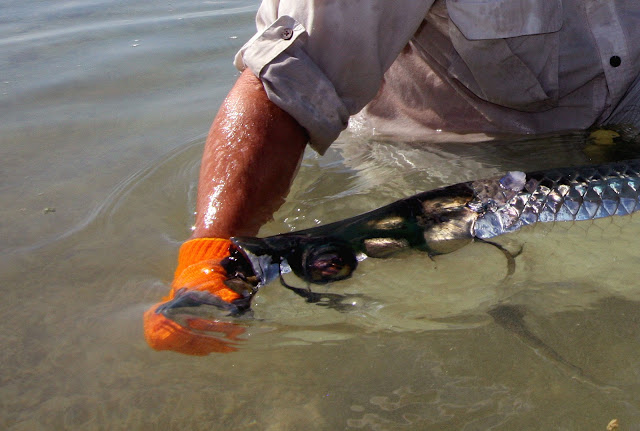 I remember taking a moment to assess the situation... let's review:


I’ve got a big rod fish attached to my 8 wt.
I’m covered in tarpon shit.
My ribs are bruised at best, and possibly broken.
...And I’m sinking.

With an act of rare intelligence, I broke off the fish (I estimated it to be approximately 90-100 lbs.) and pulled my kayak up into the mangroves to make repairs. The kayak's Hypalon hull had a 6-inch cut from where my rudder (that I had taken off the stern and stored in the boat) had been hit, where it contacted the hull, by the tarpon. The rudder had acted like a knife. Using the force of the tarpon, it had sliced neatly through the hull. The repairs took hours so I missed getting out of the creek before the tide fell. I spent the night lying in my boat marooned on a patch of marl swatting mosquitoes and drinking rum to deaden the pain from my very sore ribs. At dawn, I made it out of the creek and turned left to continue my voyage south.