Conch Fritter: A Bonefish Fly You Might Want to Tie!

The Conch Fritter:
Designed and tied by Doug Jeffries of Benicia, California, the Conch Fritter is a terrific pattern. The "Fritter" presents a large, heavy-bodied silhouette with some contrast in the tail section and good movement in the body using silli-legs.
I think this fly is a great combination of things. It looks like a big meal, but it lands relatively lightly. It has great movement, look very natural with the coyote fur and has just enough flash to be seen, but not so much that it spooks fish.
Doug has other great bonefish patterns which we will describe in the future on FLY PAPER. For more information, Doug is featured in the latest issue of Fly Fishing in Salt Waters... have a look! 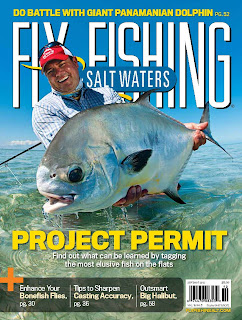 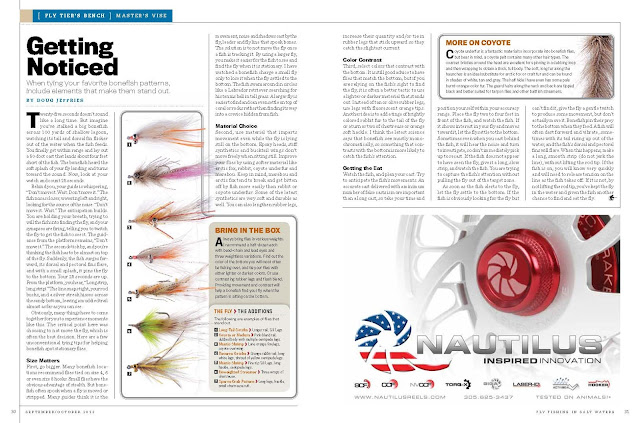 Doug has been tying flies since 1972. Doug is very innovative with materials, has a keen eye and comes up with some elegant, but still effective patterns. I have used the Conch Fritter with great success in many places. In the Bahamas, I have used it on South Andros while on the liveaboard Sea Hunter and at Water Cay Lodge on Grand Bahama Island. The Conch Fritter has also been great in Los Roques especially on the pancake flats.
Doug has been generous and given me a number of flies in color variations on the version shown here. I have told Doug I hate to use his flies because they are so pretty. But when I need a winner, I put on a "Fritter". Doug is a good friend and a gentleman to fish with. Although I appreciate his generosity both with his flies and advice, I wish he would stop outfishing me with his Conch Fritter. When he does that, I'll stop stealing flies from his fly box! 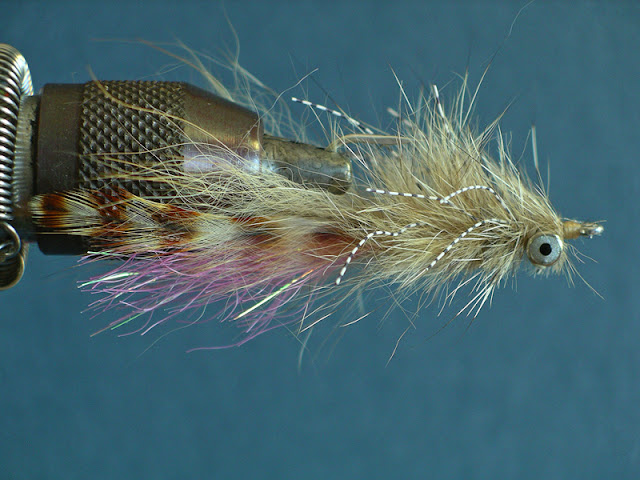 Step 1:  Mount hook in vice, normal position, and attached thread near the eye (leave one eye diameter as a reminder to leave space for a finished head).  Make two small bumps of thread about 1/16” apart.  Tie in the lead eyes between the bumps of thread with figure eight wraps.  Apply a small drop of super glue to the wraps. 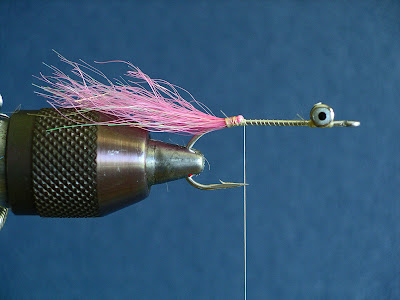 Advance the thread to a point aligning with the hook barb.  Tie in a small bundle of pink Flash Blend and trim it about as long as the hook shank.

Step 2:  Rotate the hook so the point is up.  Tie in a bundle of coyote under fur that is about twice as thick as the bundle of Flash Blend.  Using your fingers, work the coyote so the Flash Blend is shrouded within the coyote fur. 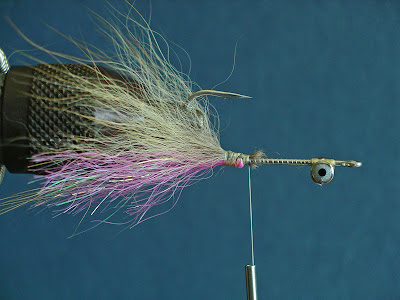 Tie in a cree or brown variant hackle feather on each side of the tail.  These hackle should extend slightly longer than the coyote fur. 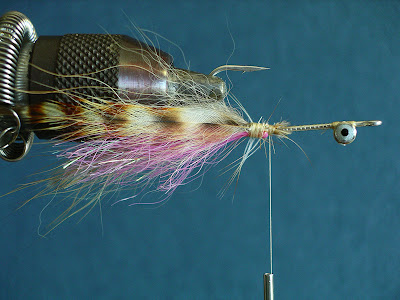 Step 3:  Make a dubbing loop and insert coyote fur which includes the guard hairs.  Make a loop that is about 4 inches long.  Use a small piece of Velcro glued to a popsicle stick to comb out the fibers as you spin the loop.

Stroke the hair backward toward the hook point and make two or three wraps beginning right on top of the wraps for the tail.  Try to cover any exposed thread wraps and make a smooth transition between the tail and body. 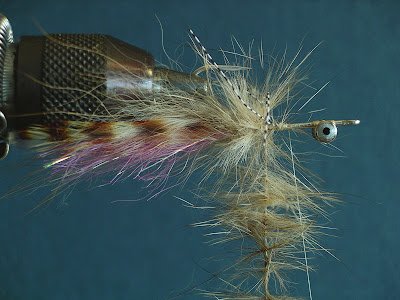 Tie in two strands of centipede legs on one side of the body so one end of the strands is about twice the length of the coyote dubbed body.  Take tw or three turns of thread slightly forward and then pull the remaining strands of centipede legs to the opposite side of the hook shank and tie them down.  Cut off the legs so they are roughly twice the length of the dubbed body.  Separate the legs and position them on the top half of the fly.  The fly should have four centipede legs sticking up at various angles. 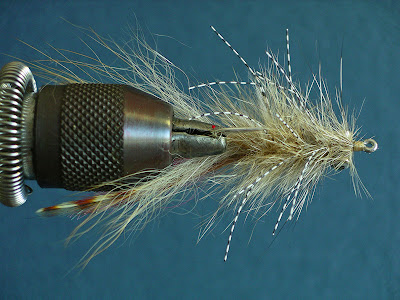 Stroke the legs and hair backward and make two or three more wraps with the dubbing loop. Then repeat tying in another pair of centipede legs. Repeat this process one more time, essentially dubbing the entire body with the legs approximately every third.  Using the last of the dubbing loop, make a wrap or two in front of the eyes. Tie off and clip the dubbing loop. Build a neat tapered head and whip finish. If desired, you can trim the fur flat on the bottom of the body. 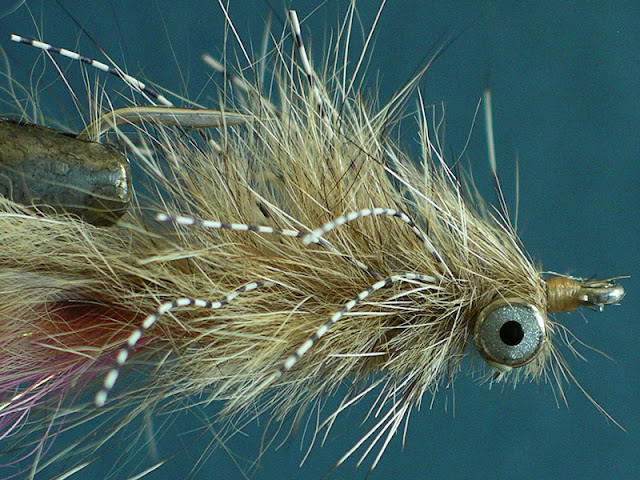