A Day in April: A Day to Remember!

#1
This little Betty charged my #2 sofa pillow, missed it (how, I'll never know... chalk it up to a rainbow's typical overenthusiasm) and then sucked up my purple pheasant tail nymph. She went from zero to "Holy Shit" in 0.4 seconds. She exploded from the shallow run and tail walked to the pool below. She was twenty one inches of muscle and pastels. I had trouble landing her. I was thrilled and muttered to myself continuously as I tried to control her. I was pleading with myself to do it right, don't get impatient and to keep a still rod tip. My pep talk worked. She had an attitude like an Alaskan rainbow and the size to match! 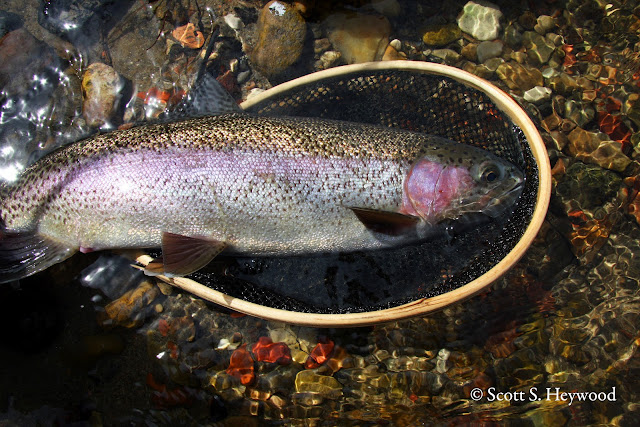 #2
This big buck brown was feeding on the surface next to a classic western 12' cut bank. I peered over the edge of the bank and snapped photos with my 300 mm lens. I soon learned how tough it is to get photos of a rising fish then had the revelation that he preferred cripples to upwing duns. I could see why! He would rise to a dun and it would fly away (see photo) so he targeted cripples. Sometimes he would eat three or four cripples at a time. Soon, I put down the camera and bent the wings on a #18 blue dun to float flat like a spinner. I used no floatant. He ate it on the first drift. He was twenty-two inches of reds and yellows with a beautiful blue cheek patch!


#3
Fish #3 was delicately and almost imperceptively eating emergers under a dark bank of newly budded willows. I could see the top of his yellow tail surface as he slurped each emerger. I re-rigged from the dry and put on a prince nymph on 12 inches of 4X. I floated the rig over him ten times before he ate. They were all difficult casts. He was a gorgeous 21" buck brown. Now I was in heaven and feeling a bit greedy. 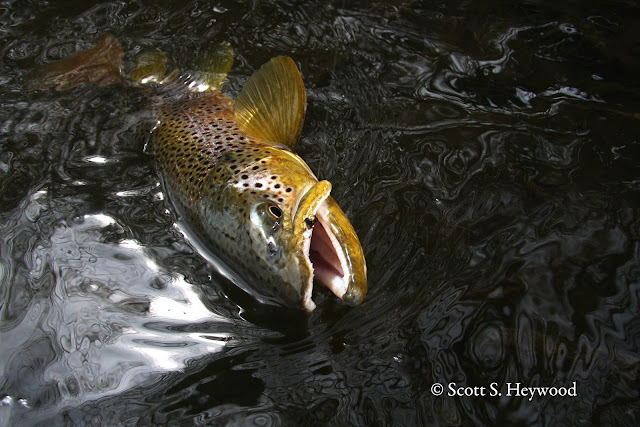 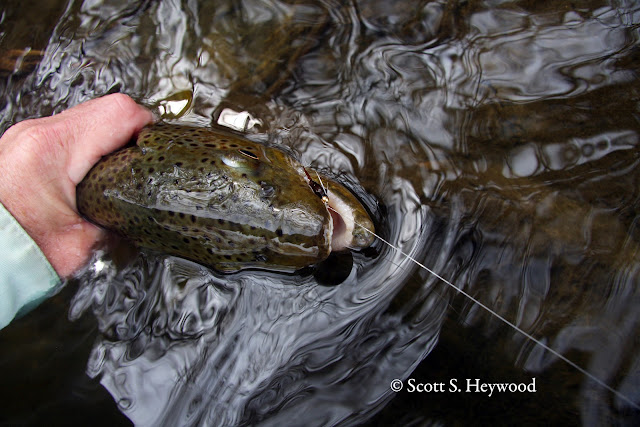 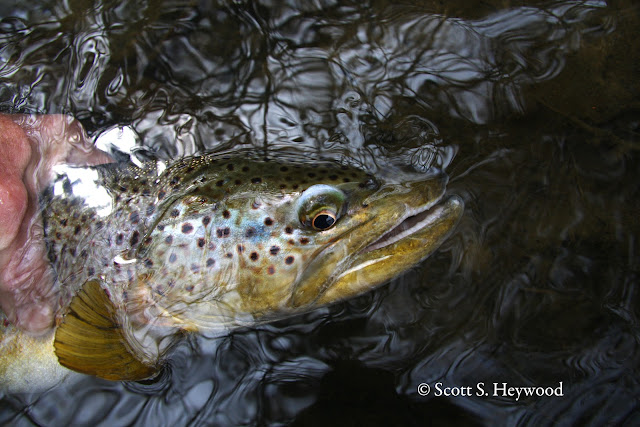 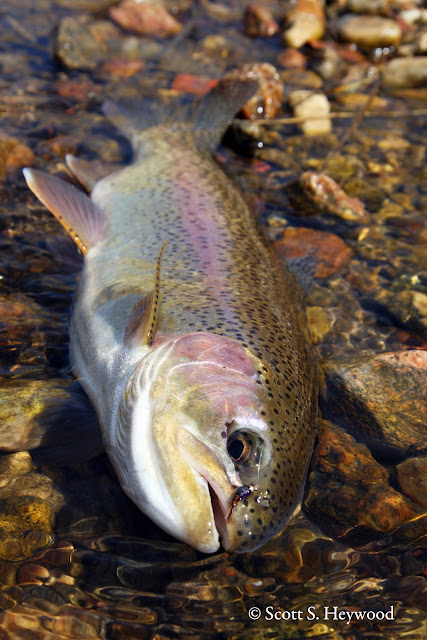 #5
Ten minutes later from the next riffle, another ho-hum moment with this stunning 21 inch brown... His back was as green as a dollar bill! 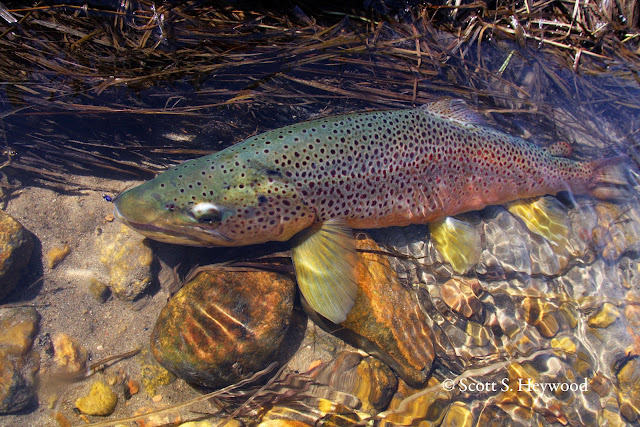 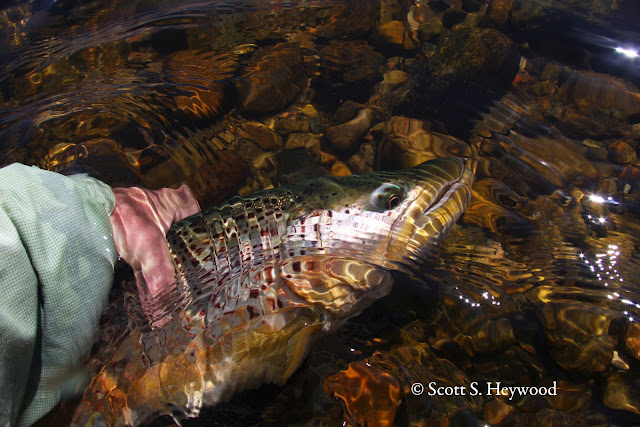 #6
Rarely do hatches announce themselves thru your ears. But standing next to this quiet run, I started to hear the whine of a midge hatch. Think mosquito sound, without the promise of a bite. Soon fish were popping, but not in a classic midge riseform. I could see a few baetis on the water and assumed this was what they were feeding on. But the rise still sounded like a caddis rise even though I had not seen a caddis all day. I put on a size 18 Adams as I knew this would work for both midges and baetis. I had immediate good results and probably could have caught as many 14-16 inch fish on dries as I wanted. But I noticed a big fish feeding in the tail end of the pool and despite my many attempts to hook him on the Adams, a smalller fish would always take the fly before it could reach him. I knew if I wanted to catch him, my best bet was to go subsurface. I rerigged with a prince nymph and just as I was ready to make my first cast. I saw a grey caddis pop up.
"Ahhh," I thought.
A classic masking hatch. We'll get back to this after I hook this big guy on a nymph. On the second drift, the Big Grabowski ate and after a long battle, I landed my second 22" buck brown of the day. What a great day I thought as I rerigged with a grey elk hair caddis fly. But that's another fish story and it's getting late!! 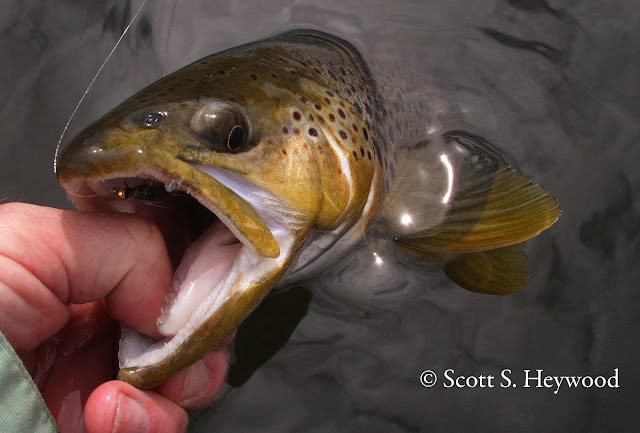 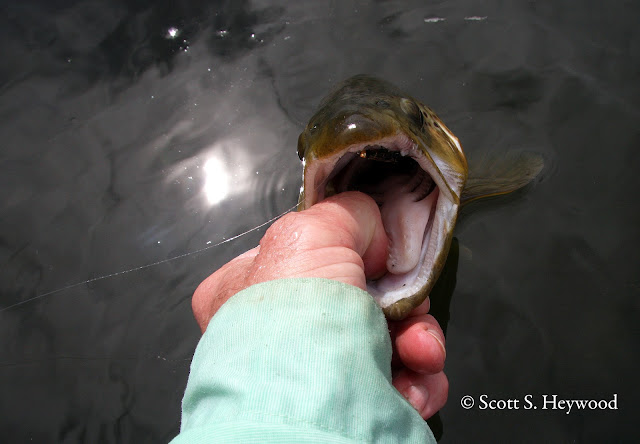 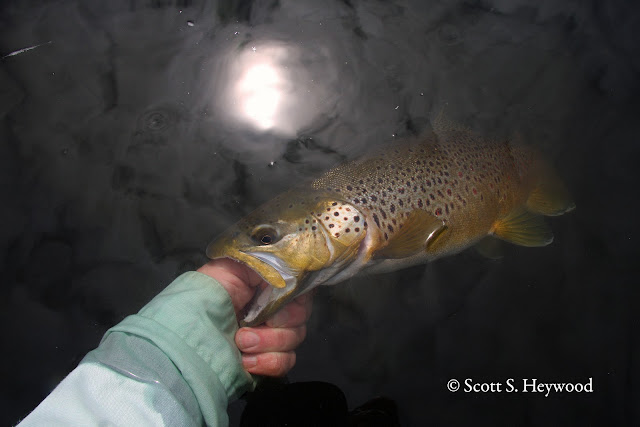 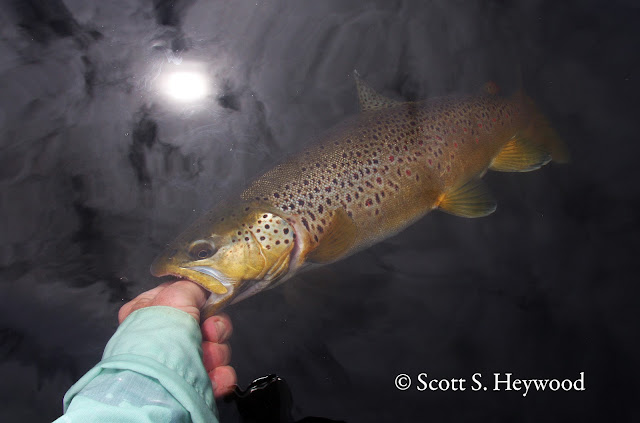