Prior to 2008, Grand Bahama Island's Northern Horn was a tough spot to reach. Several well known operators on Grand Bahama, namely the Pinder Brothers and Greg Vincent from Pelican Bay Resort fished this area, but it required long boat rides for visiting anglers (45 minutes at a minimum) which chewed up valuable fishing time. In the fall of 2008, this problem was solved by long time Grand Bahama resident and superb bonefish guide, Sidney Thomas. Sidney and his family took the task of renovating the small bonefish lodge on remote Water Cay that was destroyed in the fall of 2003 by a series of devastating hurricanes. Along with a few experienced anglers, Sidney and his brothers knew the bonefish treasure that swam in and around the flats of Water Cay. 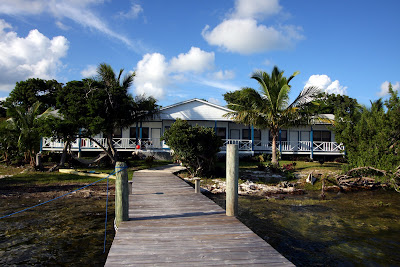 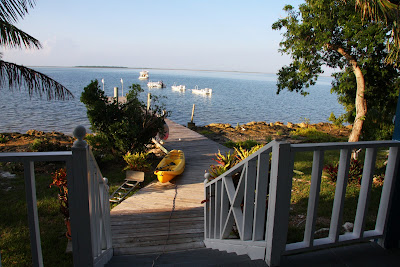 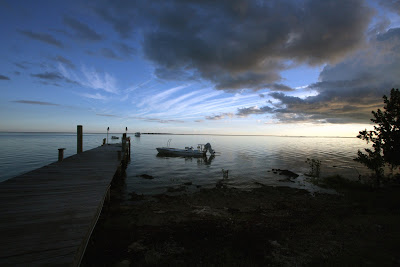 After many months of hard work, Water Cay Lodge opened its doors to traveling anglers seeking the island's most remote bonefishing. Sidney’s dream became reality as Water Cay Lodge quickly became a hotspot on the global bonefish map. The word from visiting fishermen was “BIG bonefish, naive and unpressured... some permit during the warm months and the occasional tarpon in predictable spots”. With several daily flights from the U.S. to Freeport, Grand Bahama, Sidney quickly filled his small guest lodge (6 anglers max.). Today, Water Cay Lodge has become an outstanding location for not only experienced anglers, but also beginners looking for a positive first time adventure.
Interestingly, as we have gotten to know Sidney, his methods and style of bonefishing go somewhat against traditional Bahamian angling approaches. Late in 2011, I spoke with Sidney about some of these strategies and his opinion on bonefishing, flies and gear in the discussion which follows. I hope you find some of it helpful and perhaps applicable to other fisheries around the Bahamas.
Sidney speaks...


“Bonefish got to eat. And to eat, bonefish got to get up onto their flats and find food. It’s nice to see those big tails waving in the sunlight on the incoming water. We see them and we fish ‘em directly. What I mean is that I like to have my guys go straight for the fish. No leading or putting that fly where you think them fish are gonna be. Just try to hit them on the head. The fish at Water Cay haven't seen many flies and so when they are hungry, they ain’t shy. You might think that your cast spooked them because they take flight twenty or thirty feet. But more times than not, the fish spin in a circle looking for what made the fuss. If they think it’s a ‘cuda or shark or maybe a bird, they’ll keep moving. But if the coast is clear, those big fish will come right back to the spot. If you are there, then they are gonna eat every time. We hook a bunch of BIG bonefish this way.

I tell my guys to use lead eyes on size 2 or even 1 tin hooks. Why tin? Cause if you bust off a big bonefish that tin hook will be out of them in two weeks. Better off for everyone. Why the lead eyes? Cause they make a bigger splash. The big singles and doubles pushing up on the flat are happy guys... the water’s getting higher and they hear the dinner bell ringing. When those fish are like that, the kinda fly you use doesn’t matter a whole bunch. Just stick to tans, olives, maybe a bit of orange or pink and no flash. All those little worms and shrimp don’t have flash. Flash will kill them and nature doesn’t do it much. Stick to big lead eyes, pale color flies that match the bottom, gun your cast straight at ‘em and hold on. 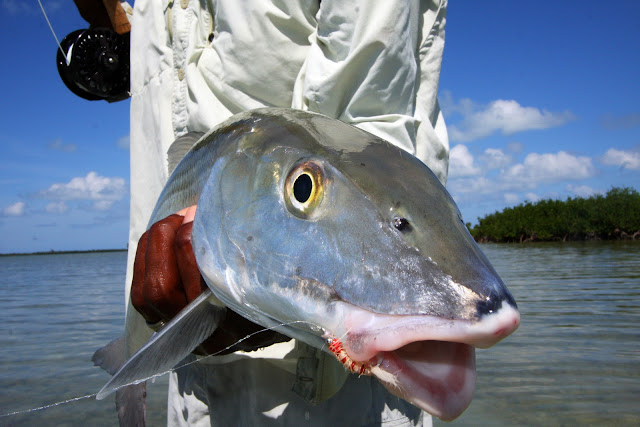 For leaders and stiffness I tell my guys to use seven to ten foot leaders, regular old ones are fine. Our fish don’t care much. They don’t care if that leader costs $10 or $3. Ten to fifteen pound is fine. For fly lines, the old ones are better than the new ones. Guys with the new bumpy lines (Sharkskin lines, Ed.) in bright color, might cast farther, but out on the flats, them fish hear that sound. They feel that sound and it’s nothing that they ever see or hear. So when they hear it, they know somethings wrong. I've seen so many bonefish run and keep running cause of that zipping sound. Bonefish feel pressure in the water and they feel that sound and they run for cover. Bonefishing is a quiet game. Things have to be natural and those new lines are the worst at wrecking happy fish. I give my guys my boat fly rod to use and try to get them to take that line off while they are at Water Cay.
Most guests who catch a six pound bonefish and feel the fight, think it’s a ten pounder! But when that same guest hooks a real ten pounder or a fish like the twelve pounder we caught this past fall, they know that six pound bonefish wasn’t a ten pound fish. Then all they want to do for the rest of their day is look on the edges and bushes for another BIG fish. Most folks have not hooked really big fish on trips to the other islands. Three, five, seven pound fish maybe. But around the horn, near Water Cay, there are really BIG fish. Guys come to Water Cay, but they come back to Water Cay because they got a big fish on their last trip and now, they want another.
To be continued...